Algood, Tennessee, USA, December 2014 – The ORION™ 2.4 Non-Linear Junction Detector (NLJD) has been tested by an independent third-party testing laboratory and found to be compliant with multiple international safety standards. 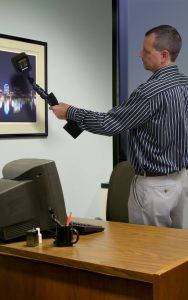 While the ORION 2.4 is FCC and CE Mark compliant, extra steps were recently taken to document the safety of ORION 2.4 against multiple international standards. The ORION 2.4 was tested and certified by SGS North America’s Consumer Testing Services Laboratory and against the following safety standards:

The above standards address human safety limits of exposure to radio frequency electromagnetic fields. The ORION 2.4 was tested and evaluated against the above safety standards and was found to be compliant.

When evaluating NLJDs, it is important to consider the RF transmit power and safety compliance of the unit. REI is pleased to offer the ORION 2.4 NLJD with superior detection capabilities in a small, portable, design which complies with multiple international safety standards. We believe the ORION 2.4 is the safest and most reliable NLJD in the world.

New NLJD Locates Electronics in a Variety of Environments